Sapphire Engagement Rings Are More Popular Than Ever

While the words diamond and custom engagement ring have been used in concert since the late Victorian era, the tradition isn’t unbreakable. In fact, a growing number of future brides forgo diamond engagement rings altogether – based on personal preferences, moral grounds or financial reasons. Like its sister, the ruby, sapphires are gems of the mineral corundum. Both of these gems have the same chemical composition and the same mineral structure.

Second only to the diamond in durability, sapphires are an alluring alternative for engagement and/or wedding rings. They offer an almost limitless array of options in color, size and shape. Sapphires are literally available in every color of the rainbow – from vivid blues to delicate pinks. Another reason to consider sapphires: they’re more affordable, which allows you to buy a larger sapphire on the same budget. 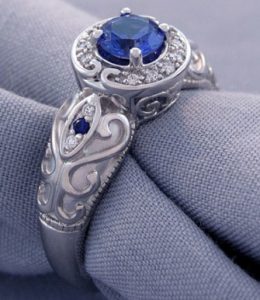 The Brilliant History of Sapphires

These gemstones were mined as early as the 7th Century BC in India, so the history of using sapphires in engagement or wedding rings naturally predates diamonds by centuries. The Romans were the first to use engagement rings to show the honorable intentions of the groom. However, the tradition of engagement rings as we currently know it began in 1215, when Pope Innocent III instituted a mandatory waiting period of ”engagement” before marriage.

During this period, it was also believed that a sapphire’s color would change or fade if an impure or untruthful person wore it. Crusaders reportedly used sapphires to test the fidelity of their wives after returning from long campaigns.

Sapphire rings became a major modern trend in the 1980s, when Prince Charles presented the future Princess Diana with an oval blue Sri Lanka sapphire surrounded by a cluster of 16 diamonds engagement ring. History repeated itself again when Prince William gave Kate Middleton the same famous ring before their marriage.

Blue Sapphires: Every sapphire color has its own quality variations, but blue is the standard by which the finest, most popular sapphires are measured. In general, the more intense the color and the fewer zones of unattractive color, the more valuable the stone.

The most highly valued blue sapphires are velvety blue to violet-ish blue, in medium to medium dark tones. Preferred sapphires also have strong to vivid color saturation. The saturation should be as strong as possible without darkening the color and compromising brightness. Sapphires with these qualities command the highest prices per carat.

Fancy Sapphires: All non-blue sapphires, no matter the hue, are categorized as “fancy”. The major fancy sapphire color categories are padparadscha, pink and purple, orange and yellow, green, clear and black. Each category has its own color range and causes of color.

Lime green, magenta, white, orange, brown, cognac, violet and all colors in between are considered rare and unique sapphire colors. Ironically, these rainbow-colored gems are not always more expensive than blue sapphires. Those who value their individuality and personality drive the demand for fancy sapphires.

Yellow or golden sapphires are becoming increasingly popular. When compared to the cost of blue varieties and rubies, yellow stones offer excellent value and beauty.

Padparadscha sapphires are very rare due to their pinkish-orange color and offer the highest carat value of all the fancy gemstones. This variety, found in Sri Lanka, Vietnam and areas of East Africa, can exceed the price of the finest blue stones depending on the size and quality of the gem.

As in choosing any gem, be cautious of bargains and always deal with reputable jewelers. Every technique known to man is used to improve the perceived quality and value of sapphires, no matter the hue. Colors are altered and diffusion treatments are applied in order to add deeper color to the surface of stones.

If considering very fine blue (especially those from Burma or Kashmir) or padparadscha varieties, it’s highly recommended to have the gem laboratory tested for confirmation of authenticity and whether any enhancement techniques were used on it.

Here are a few more important points to consider when choosing the perfect sapphire:

Focus on the quality of the gem – not its size; quality ultimately matters the most.

Confirm the gem’s clarity. The general rule is that when looking into the stone with the naked eye, there should be no visible cloudiness, although certain types of inclusions do not reduce brilliance, obscure color or otherwise detract from a stone’s beauty.

Like diamond engagement and wedding rings, sapphires are available in a variety of cuts and settings. Whether you choose a platinum, palladium or 18k gold band, a sapphire engagement or wedding ring is sure to make a statement.