Last week we showed off some of the new custom corporate logo jewelry we have made recently. This week we wanted to reach back into the thowback vault and show off a few items we have made in the past as well.

We created these corporate medallions for the Zell Company. We made them in sterling silver and designed them so that they could be used either as key chains or pendants.

They arrived…..WOW!!!!!!! If you ever need a referrral, I would give you one in a minute.  You guys do excellent work and you gave me better than great service.   I am so happy I found you on the internet. THANK YOU SO MUCH….. 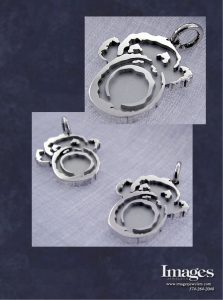 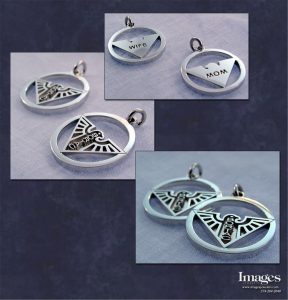 These custom pendants were made for a customer who is a part of the United States Border Patrol Tactical Unit or BORTAC. He wanted them made for his wife and mother to let them know that he will always be with them. BORTAC is the tactical/special response arm of the United States Border Patrol. The mission of BORTAC is “to respond to terrorist threats of all types anywhere in the world in order to protect our nation’s homeland.” Since its inception BORTAC has steadily expanded its scope and mission capabilities, and is now a rapid response unit capable of executing both foreign and national level domestic operations. Their missions have included international training/advisory functions, counter terrorism operations, counter narcotics operations, high-risk warrant service, dignitary protection, interdiction & patrol operations, and tactical training to other U.S. agencies and military units.