As we have said before, we do more than just custom rings. We also create amazing custom jewelry accessories such as pendants and earrings and even bracelets! This week we take a look back at some of our favorite creations from years gone by. 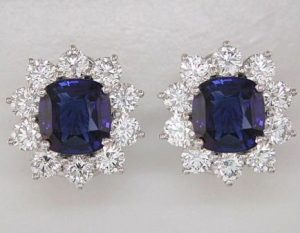 These fine sapphire earrings were custom made in platinum and contain 9.84 carats of cushion cut Ceylon sapphires and 4.94 carats of ideal cut diamonds. (E-F, VS1) These earrings are among the finest pieces of custom jewelry we have ever created. 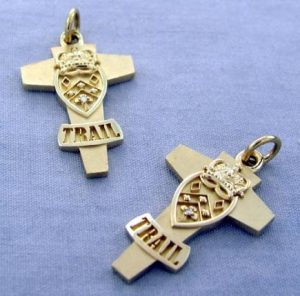 Demonstrate your ancestral lineage. Show the world the crest for your family name. Need a gift for a friend or relative? This is the perfect Birthday, Anniversary, or Christmas gift for the person who has everything! This special piece of jewelry contains your family’s Coat of Arms or Crest, milled and cast in a heavy 14k white or yellow gold design that can be passed down from generation to generation. Call us at 574-264-2040 or email Kelly@imagesjewelers.com and we would be happy to make this one of a kind gift for your family. 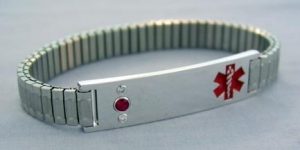 This bracelet was made for a customer who wanted to make sure that she had a high quality medical bracelet, so that in case of an emergency it would be clear to the responders what her medical issues are. Since a medical alert bracelet is meant to be worn at all times, if the information on the bracelet is just scratch engraved on to the bracelet, it is bound to wear off over time. So for her custom bracelet we made  her  information raised with a high relief,  so it will never wear off. If you need to wear medical alert jewelry, you don’t want to have to worry that the information will be worn off or unreadable. We made this custom bracelet with a stainless steel stretch bracelet.  We also incorporated a ruby, which is her birthstone, and two accent diamonds into the bracelet.  The customer was very pleased with the result because she no longer has to worry about her care in case of an accident. 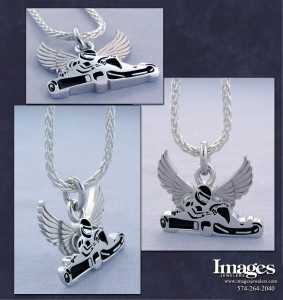 After hearing the hardship of a brave and resilient young man, we wanted to do something special for him; so we made him this custom pendant. A 16 year old named Connor Watson was competing in the second heat of the go-kart races with seven other karts when he lost control of his vehicle on the second turn of the first lap and crashed into the retaining wall.

“Connor was near the front when he went up high, lost control and hit the wall very hard,” Track owner Merle Holden said. “Then he drifted to the exit and came to a rest right where the apron and track come together.”

Holden said the on-hand trauma nurse immediately began tending to Watson and called an ambulance. He estimated first responders were on scene within 10 minutes.

Watson was eventually moved to the parking lot and was airlifted to Bronson Methodist Hospital for further treatment.

Holden said he was told by Watson’s father, David Watson, that the teen was initially unconscious and thought to have suffered internal swelling and a possible laceration to his liver. Conner’s condition slowly improved, from opening his eyes and breathing on his own, to eventually walking on his own.

The karts can travel up to 70 mph, and it was estimated that Conner was traveling around 60 mph when he hit a wall taking the turn. It has been a long road for Conner, and his recovery has been dramatic over the past few months thanks to his never quit attitude. This one of a kind pendant was crafted in sterling silver and features a go-kart with angel wings, because an angel was watching over him that day. As you can see, he has a very infectious smile, and our entire team was happy to do this small gesture for such a great guy.